oaktree – The Oak – Sovereign among the Trees

The tree is a symbol of constant regeneration, fertility, vitality and eternal life. It is a source of nourishment. And of protection. With the longing for rebirth and immortality rooted deeply in the human soul, for many cultures and religions, the tree has not surprisingly played a major role as an archetypical symbol of life. Especially the oak.

For thousands of years humans have associated the oak tree with energy, power, strength and immortality. This high symbolic value accorded to the oak meant that for many cultures it was the tree of trees, their monarch.

If we think about an oaktree, the typical picture that rises before our eyes is of a powerful and old specimen, with a thick trunk, fissured bark and gnarled branches. Standing alone in an open filet, defying gales and tempests, its crown rises fearlessly into the sky. Ready for the next flash of lightning. And an oak may indeed be hit. For two reasons. First, because oaks often stand alone or at large distances from other trees. It is a light-hungry tree: without adequate space and light an oak’s development will be stunted. Secondly, oaks like growing over underground watercourses, which they penetrate with their long tap roots. However, even if the tree is hit by lightning, loses its crown, and the trunk is split, it will remain standing, staunch and dignified, for many more decades.

To talk about oaks and rocks

is to allude to the hardness of the wood

and is no less significant

than a discussion about the origins of the world

If they could speak, the old oaks, they would have a lot to tell us. As one of the first tree species to evolve after the last ice age, they have existed for thousands of years. The earliest humans venerated the oaks as a sacred tree and utilized its curative powers. As a source of vital energy, the oak also served to ward off diseases.

The Celtic priests, the Druids (dair or duir = oak), were the “oak experts”. Only they were allowed to cut the mistletoe from the oak trees in the sixth month of the year with a golden sickle. The parasitic plant was employed for its healing and prophylactic properties The Roman author Pliny wrote that: “Nothing is more holy to the Druids than the mistletoe and the tree on which it grows, especially when that tree is an oak.” Mistletoe is still used today in homeopathic medicine.

Through the ages different cultures have dedicated the oak tree to a specific god. For the Greeks it was Zeus, for the Romans, Jupiter, the god of lightning. The Germans assigned it to Donar, the god of thunder. Sacrificial sites were erected under an oak tree or in an oak grove. The connection between the god and the oak was self-evident: does the tree not radiate energy, power and strength, in other words the very attributes that are claimed by gods and rulers? Tribunals were also held beneath oak trees.

Various properties have been ascribed to the oak over the centuries, most of them, however, more a matter of wishful thinking than based in fact. Oak leaves, it has been claimed, can repel lions. An oaks stake stuck in a dung heap will scare away snakes.

The Romantics breathed new life into the old Celtic and Germanic myths. Magic forests surrounded by old oak trees and the yearning for a virgin nature lay at the core of the poets’ and painters’ vision. Goethe, so the story goes, wrote the witches’ sabbath section of “Faust” while sitting under an ancient oak tree. The Romantics, though, also restored the symbolism of the oak tree as an archaic, dignified and steadfast being. In Germany, at least, the tree was almost predestined to become a symbol of heroism. “As faithful and imperturbable as the German oak” is how the motto puts it. From the turn of the 19th century, oak leaves replaced laurel in the victor’s wreath.

Of all the qualities that have been ascribed to the oak tree, there is one we should not forget: the oak as a donor of energy. In today’s hectic and restless world, many people are rediscovering the regenerative capacities of nature. “as healthy as an acorn”, is one German expression equivalent to “as sound as a bell”. For while the oak tree provides an archetype for power, its fruit proffers an image of health and freshness.

The Oakwood at Schloss Wildenstein

When Heinrich von Eptingen erected the tower of Wildenstein castle in 1293 and dubbed himself “von Wildenstein”, little could he have foreseen the turbulent times that lay ahead. Sold, inherited, given away, besieged, over the centuries Wildenstein changed hands many times. In 1792, the castle finally passed into the possession of the Basel family Vischer. Extensive renovations and improvements followed. In 1994, Wildenstein was acquired by Canton Basel-Land.

The Wildenstein oakwood-pasture is a unique nature reserve surrounded by one of the few remaining areas of medieval cultural landscape. It is without doubt one of the most impressive and last-surviving witnesses to a centuries-old past.

The pedunculate oak – Quercus robur – and the sessile oak – Q. petraea – are the two species that grow in the Wildenstein oakwood. Some of them are over 500 years old, and the oldest dates back to at least 1488. Small wonder, then that oaks are said to live for more than a thousands years. It is hard to believe that the branches of such old trees can still bear leaves, let alone fruit. The names of the oaks refer to the manner in which the fruits are borne: in the case of the pedunculate oak, on long stalks, while those of the sessile oak hang, grape-like, on very short stalks.

Powerful, old oaktrees were planted at regular distances from one another and carefully tended over the years. Now they stand erect, furrowed and knotted, their branches spread out wide, their crowns rising proudly into the sky. Majestic trees, despite their considerable age. They have braved numerous storms. Many springs, summers, autumns and winters lie behind them. The lines etched deep into their bark testify to that. Wind, sun, rain and ice have left their mark. Here and there, heavy and tired branches have broken off from the trees and lie on the ground. Why could the oaks no longer carry them? Were they so rotten that they were torn off by the wind during a storm? They leave behind dark hollows in the tree trunks. What, one wonders, is hiding in there? According to a popular belief among the ancient Greeks, tree elves, or dryads, live in oak trees. Anyone wandering through a leafy oak grove in spring or summer will perhaps hear their laughter – mixed in with the buzzing, the mumming and the birdsong.

The oak provides nourishment, a habitat or protection to more animals and plants than any other tree. There are plenty of names that document this: the oak moss, the oak gall wasp, the oak-beauty, to mention just a few. Nearly 1,000 animal and plant species have been recorded in the Wildenstein oakwood, including the stag beetle, great capricorn beetle, moth species such as prominents and the dark crimson underwing, butterflies like the green oak tortrix and purple hairstreak, oak bush-crickets, wild bees, the green woodpecker and the spotted woodpecker. In addition, 140 different species of lichen and 20 different fungi have made their home here.

So much young life amidst so much age and wisdom! Each oak tree has its place here. Even those trees whose crowns are broken or withered. All one can do really is simply admire them: what steadfastness, what self-confidence, what a will to survive. They are stoics, just like the oak in the famous painting by Caspar David Friedrich entitled, “The Lonely Tree”.

the oaktree – A Valuable Tree for Many Cultures

With their ideal and idyllic landscapes, the Romantic painters sought to create a counterworld to rationalism. Their motifs were either light-flooded woods with old trees, like the oakwood-pasture at Wildenstein, or free-standing trees, like the oak in Caspar David Friedrich’s picture. But what the painters were really depicting were representations of cultural landscapes that were the product of human activities.

The name oak comes from the Latin “esca”, which means food, and refers to the acorn. According to Pliny’s “Natural History”, written in the first century AD, the fruits of the oak were humankind’s very first source of nourishment. From the Middle Ages on, European farmers practised a three-field crop rotation system. One of the consequences of this agricultural practice was a shortage of meadows for the livestock, so cattle also hat to graze in the woods, this in turn influenced the growth of young plants, thinning out the trees, and giving rise to the typical wood-pastures. In autumn, pigs were driven into the oakwood-pastures, because the fruit of the oak, the acorn, is particularly nutritious. It also imparts a very special spicy flavour to the ham.

Bark, wood, fruits, leaves – over the centuries, intensive use was made of all parts of the oak tree. The tanning-rich bark, for example, was employed both as an anti-inflammatory and as a source of tanning liquor. The fruits were not only used to fatten pigs: particularly in times of a food shortage, they were processed to make acorn-based beverages. This practice was still going on the first half of the 20th century, during and after the Second World War.

However, one of the main reasons for the indispensability of the oak was its wood: hard, durable and almost totally imperishable in water. It was for these attributes that the oak became a symbol of immortality. Oak wood was used to make ships, railway sleepers and waterwheels for mills. Oak casks were constructed to store wine and schnapps. Doors, brides, houses and belfries were carpentered from oak wood. By the English, the oak was considered to be “the father of the ships”, and it was the multiple uses to which oak could be put that made colonization and overseas trade possible. The virtues of oak wood are still appreciated, even if it is no longer used as much today as it has been in the past. Oakwoods have become rare. And oakwood-pastures, in particular, have almost completely vanished. The triumph of the potato and agricultural intensification are not the least important causes of this current situation.

The owners of Wildenstein have been prudent, and it is thanks to them that in the Basel region, it is still possible to take a walk through an oakwood-pasture. Early on, they recognized the importance of the oak as a cultural monument and witness. The loss of the oak, of the energy it donates to both humans and animals, would be inexcusable.

However, in the midst of our frantic and mobile lives, what the oak also imparts to us is a sense of quietness, security and stability. With its slow but steady growth, it represents the antithesis to a fast-paces way of life and mass production. Who today is aware that it takes an oak tree 200 years to reach the peak of its maturity? And the older the oak tree, the more valuable its wood and what is made from it. Just like a wine that improves the longer it is laid down. The connection between the oak and wine may hold out a more practical promise. Oak wood and the art of cooperage are experiencing a revival, and this new development might perhaps contribute to restimulating interest in the oak tree. And with it, more concern and esteem for one of the oldest trees in global history – the sovereign among the trees.

The lifespan of an oak compared to that of a human is almost an eternity.

Those who plant oaks are thinking not about their children or grandchildren – but believe in the future.

All the photographs by Sabina Roth were taken in the oakwood-pasture at Wildenstein, Bubendorf – Switzerland. 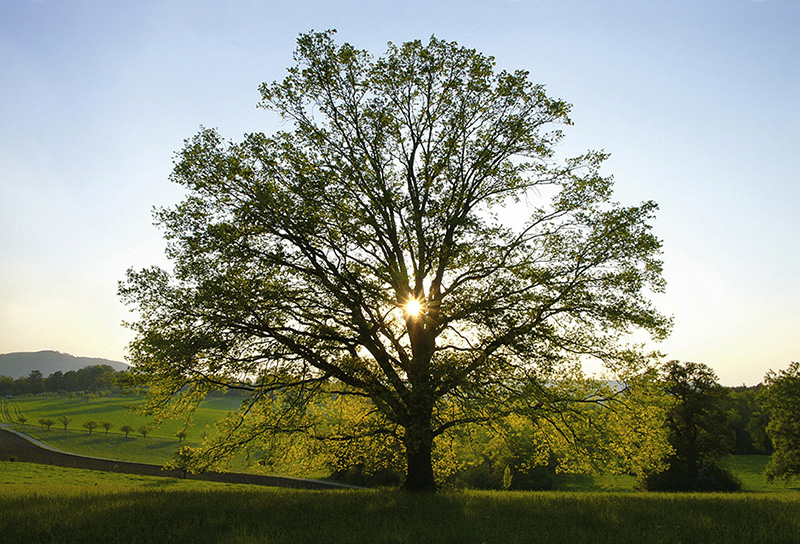